More than 1,000 firefighters are battling the fast-moving wildfires in Ventura County, California. And for a few hours late Monday night, they had help from a band of friends armed only with garden hoses.

From his home in nearby Camarillo, Brylle San Juan could see the glow of the fires blazing through Ventura, which have burned about 50,000 acres in the Southern California county. That’s when he and four of his friends decided to do something. He grew up in the county and didn’t want to sit idly by as it burned.
San Juan said they jumped in his two-door Honda Civic and made the 14-mile drive north up to Ventura to see what they could do to help. 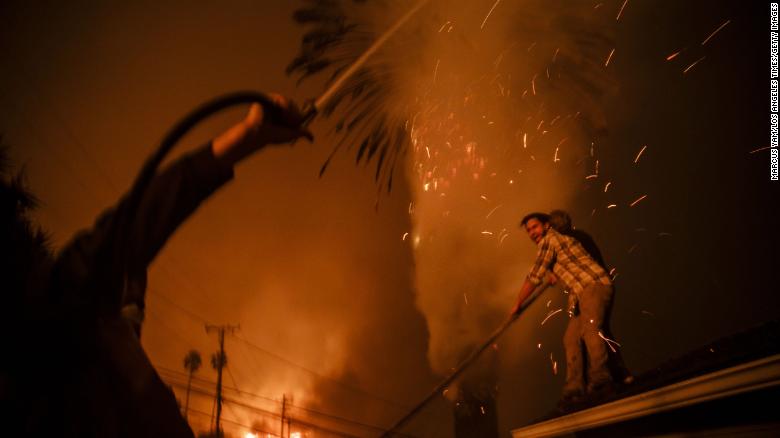 Strangers band together to help put out a palm tree on fire and stop it from burning homes.
San Juan and his four friends — Matthew Serna, John Bain, Brandon Baker and Prescott McKenzie — ended up on Poli Street, in a neighborhood where the flames had already hit. Several houses were on fire and a large apartment complex about a quarter of the mile away from where they were was engulfed in flames.
“It was kind of stupid of us to do so, but everyone wanted to help,” he told CNN.

Firefighters were already there, but they were understandably tied up trying to save structures, so San Juan and his friend grabbed garden hoses and got to work.
They started hosing down houses and were later joined by a handful of neighbors in the effort. The group was using three garden hoses at one time and lots of buckets to keep homes wet.
San Juan said they never felt unsafe, although the firefighters who were there told them they should head for some place farther away from the flames. 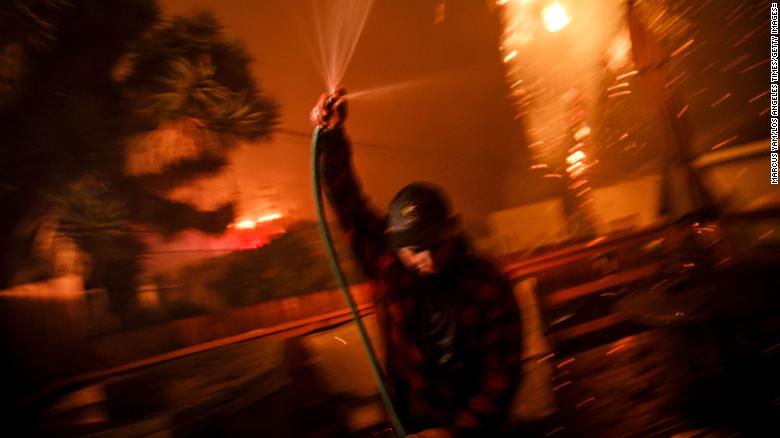 Prescott McKenzie hoses down the roof as embers move with the wind.
“There were a couple of moments where the wind shifted, and it blew a lot of embers unto us,” he said, but other than they were OK.
When a large tree in the neighborhood caught fire and threatened a home, the firefighters let the friends use one of their hoses to knock down those flames.
They stayed on Poli Street for a little over three hours, from midnight until about 3:30 a.m. San Juan said although the fire was still burning in the neighborhood, the immediate threat had eased for the handful of houses they were trying to save. 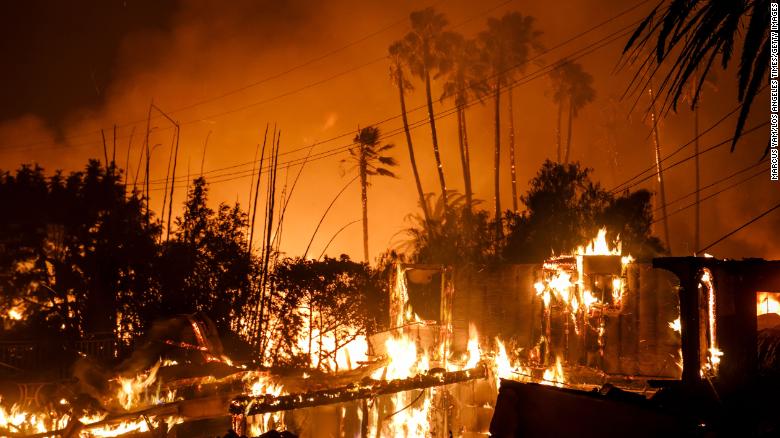 A home is destroyed by a brush fire as Santa Ana Winds help propel the flames to move quickly.

On their way back to Camarillo they rode through downtown Ventura, which San Juan said was in an eerie “fog” of smoke. The streets were deserted, except for a handful of police officers trying to get some homeless people to evacuate the area.
“It was almost apocalyptic,” he said. 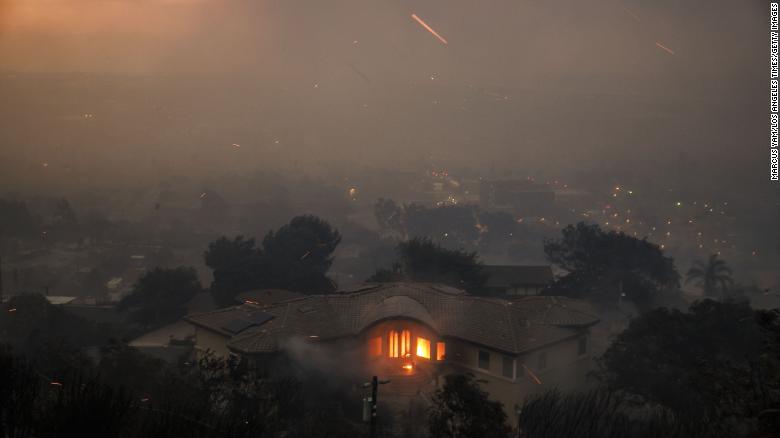 A home burns on a hillside overlooking Ventura, California.
All the way on the drive back home they could see fire, known as the Thomas Fire, raging on the horizon behind them.
As the sun came up this morning, San Juan, now safe in his house, said he could make out the smoke from the fires. But he has nowhere to be today because he’s a college student at Ventura College, and classes there have been canceled because of the wildfires. So he’s prepared to jump back into the fray — garden hose in hand — to help if needed.